On September 7, 2021, the Hungarian Presidency of the Council of Europe’s Committee of Ministers hosted the conference in Budapest on “The role of NGOs and research institutes in promoting Council of Europe norms and standards on national minority rights”.

Promoting national minority rights is a priority for the current Hungarian presidency of the Committee of Ministers. The event was opened by Péter Sztáray, State Secretary, Ministry of Foreign Affairs and Trade of Hungary, together with Hallvard Gorseth, Head of the Council of Europe’s Anti-Discrimination Department. The conference took place at the Council of Europe’s European Youth Centre, and was streamed online.

The third panel introduced the Study on political participation of national minority youth in member states prepared by the specialised working group of the Steering Committee on Anti-discrimination, Diversity and Inclusion (CDADI). The study includes good practices from Council of Europe member states and recommendations to bolster the realisation of the political rights of national minority youth. Civil society organisations contributed to the study.

The event was attended by the Head of the Department for International Development of the Association of Lawyers of Russia, member of the working group Cha Mi Vu. 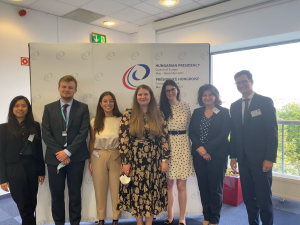