Meeting of the ALRF Commission on Sustainable Development Goals (ESG)

Commission of Association of Lawyers of Russia (ALRF) on Sustainable Development (ESG) held its first meeting on November 12, 2020. The meeting was attended by the Deputy Chairperson of the Board of Gazprombank JSC, member of Presidium of the ALRF, Chairperson of the Commission Elena Borisenko; First Vice President of Gazprombank JSC, Deputy Chairperson of the Board of the ALRF Natalia Tretyak; Vice President of the RUSAL, member of Presidium of the ALRF Elena Bezdenezhnyh; Plenipotentiary Representative of the Government of the State Duma of the Russian Federation, member of Presidium of the ALRF Alexander Sinenko; Member of the Board of SIBUR Holding PJSC, Alexey Kozlov; First Deputy Chairman of the Committee of the State Duma of the Russian Federation for the Development of Civil Society, Issues of Public and Religious Associations Dmitry Vyatkin; Deputy General Director, Head of the Corporate and Property Relations Unit of Inter RAO PJSC Tamara Merebashvili and others.
During the meeting, the participants discussed the composition of  the Commission and Regulation thereon, and outlined plans for the near future.
Chairperson of the Commission Elena Borisenko proposed to hold meetings regularly and noted that the Commission plans to hold at least 4 events during the year on the following topics: ecology, women’s support and leadership in the legal profession, labour relations in changing circumstances and key approaches to corporate governance. Another proposal was to create a working group to prepare draft conclusions for bills related to SDG.
Liliya Gumerova, Chairperson of the Federal Council Committee on Science, Education and Culture, told about significance of Eurasian Women’s Forum, which aims at consolidation and development of cooperation between women leaders in order to solve actual challenges and strengthen the trust and mutual understanding in the world, based on the universal values of humanism, rights and dignity.
Marina Gassiy, Advisor to the Deputy Chairperson of the Board of the Gazprombank JSC, noted that one of the most important objective of the Commission is to promote the integration of the Russian Federation into international community to carry out the sustainable development goals
set by the UN.
Elena Spiridonova, Acting CEO — Chief of Staff of ALRF, noted the importance of the topics raised by members of Committee of Commission.
Elena Borisenko congratulated all the participants on the meeting. “I hope that our commission will be useful not only for the Association of Lawyers, but to the entire Russian Federation,” concluded Elena Borisenko. 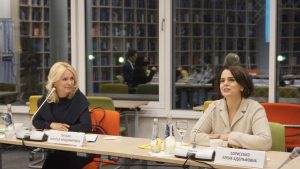 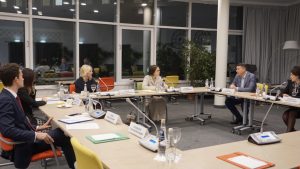