The President of the Russian Federation has announced the 2019 as a Cross-Year of Russia and Vietnam. During the official visit of the Prime Minister of the Socialist Republic of Vietnam Nguyen Xuan Phuc, on May 22, 2019, the Association of Lawyers of Russia and Vietnam Lawyers Association (VLA) signed a cooperation agreement aimed at strengthening partnership relations between two organisations.

The signing ceremony was witnessed by the Prime Minister of the Russian Federation, Chairman of the Board of Trustees of the ALRF Dmitry Medvedev.

The Agreement was signed by the Chairman of the Board of the ALRF Vladimir Gruzdev and President of the VLA Nguyen Van Quyen. Earlier in 2017, Mr. Nguyen Van Quyen visited the ALRF office in Moscow. 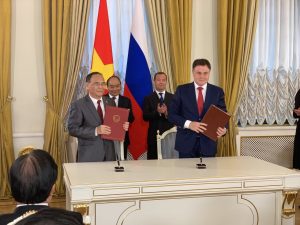