On 15 May 2020, BRICS legal communities held a videoconference to exchange views on legal education. The meeting was attended by Vice Chairperson of the Board of the Association of Lawyers of Russia Natalia Tretyak, Rector of the Swiss Academy for International Law Alexey Klishin, CEO – Chief of Staff of the ALRF Stanislav Alexandrov, CEO of the International Legal Education Centre Olga Benditskaya, Head of the Department for International Development of the ALRF Cha Mi Vu.

The conference was joined by President Elect of the Bar Association of India Prashant Kumar, Secretary General of the Foreign Affairs Committee of the Brazilian Bar Association Bruno Barata, Deputy Director of the BRICS Legal Institute of the East China University of Political Science and Law Tao Du and others.

Participants noted the prospects for launching joint educational programmes in the sphere of law, in particular international law, and discussed online courses, internships and short-term programmes not only for students, but also for practicing lawyers. 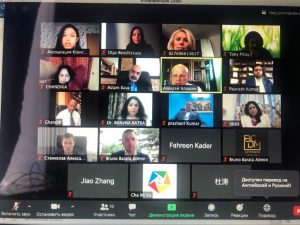