Chairman of the Association of Lawyers of Russia (ALRF) Vladimir Pligin has launched the VII BRICS Legal Forum, which is taking place in online format on 18-19 November 2020.

At the plenary session entitled “Law and legal order: values and principles in the context of global challenges of modernity” the ALRF Chairman read out the greetings to participants and hosts of the Forum from the Deputy Chairman of the Security Council of the Russian Federation, Chairman of the Board of Trustees of the ALRF Dmitry Medvedev and Russian Foreign Minister Sergey Lavrov.

During the plenary session, experts concentrated on legal guidelines and fundamentals of legal education necessary to maintain the stability of legal systems and to enhance the legal cooperation among the BRICS Member States, particularly, in critical situations.

Vice Dean of the Faculty of Law of the Saint-Petersburg State University Sergey Olennikov underlined the role of joint activities within BRICS in the sphere of legal education.

Chairman of the Board of the ALRF Vladimir Gruzdev noted that «the BRICS Legal Forum is a significant platform for lawyers, achivement of new gains, and expressed confidence that the Forum will not be affected by its online format. However, due to the pandemic, what is more important: human rights or social interests? The restrictions set by the pandemic are primarily aimed at protecting the right to life, but we should take into account both the social interests and the individual right to privacy.»

State Secretaty – Deputy Minister of the Russian Federation for Civil Defence, Emergencies and Elimination of Consequences of Natural Disaster Alexey Serko in his speech raised the issue of climate change, which is a global challenge of our time.

«In Brazil, cooperation among peoples for the progress of humanity is constitutionally recognized as one of the principles that dominates in our policy for international relations. In this regard, the BRICS system of cooperation, which operates in various areas of collaboration, such as science and technology, agriculture, energy, intellectual property and economics, is of essential importance in the implementation of other principles, including those relating to fundamental rights and guarantees,» said President of the Commission on Foreign Affairs of the Brazilian Bar Association Claudio Lamachia.

President of the Bar Association of India Prashant Kumar thanked the ALRF for hosting the Forum.

«Since 2014, we have seen the Forum developed in a satisfactory way, although we have scope to take it further. But this year has been indeed fruitful for the legal cooperation within BRICS. The five countries present a diversity of legal and government systems, which is the strength of the BRICS. We could work together, so BRICS could provide leadership in helping to structure the legal framework of global trade, economy and political life,» he said.

Vice President and Secretary General of China Law Society Zhang Mingqi noted that «the latest circumstances have demonstrated that only through concerted efforts, mutual assistance and more unity can we jointly overcome difficulties and score a victory in this global fight. BRICS countries should, in addition to supporting and working with each other, increase support and investment to the World Health Organization, and foster the building of a health community with a shared future for mankind.»

Chairperson of the Legal Practice Council of South Africa Kathleen Dlepu acknowledged the importance of promoting women in legal profession and also stressed the need to restructure the legal practices and way of work in the legal sphere in order to meet the demands of the future challenges. «The BRICS Legal Forum present an opportunity to share technical skills to help align our legal processes with the work that is already underway in some of the Member States,» she said.

The plenary discussion set the directions for the further work of the Forum’s panel sessions in order to determine current forms and prospects for cooperation among the BRICS Member States. 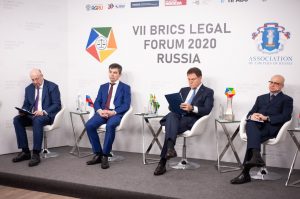